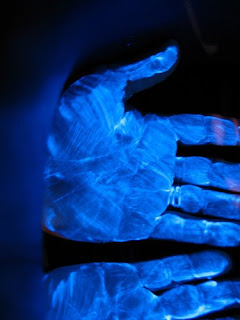 Happy New Year from Resourceful Mommy! After a brief holiday hiatus, I’m looking forward to getting back to being resourceful. As I write this I am battling a slightly more than annoying case of bronchitis that I know travelled straight from my son’s pre-school class to me, politely making no stops at my children. It seems like the perfect time for a post about viruses, bacteria, and those alcohol based hand gels that most of us use, but some people rely on….perhaps too much. So think of this as a cautionary tale to get start your new year.

Last January my family travelled to Virginia to celebrate my nephew’s first birthday with a party at the local “please touch” museum. While he mostly enjoyed watching the other children play, it was a wonderful morning of fun for my three year old daughter and twenty month old son. They ran excitedly from exhibit to exhibit, touching, practicing, picking up, passing around…. At times the museum got crowded as elementary school aged kids celebrated their birthdays, their parties shuffling in and out of the party rooms. But in general, my children had a wonderful time.

Then in the wee hours of the next morning my daughter woke up vomiting – the first time ever – and continued to vomit every 20 minutes for the next few hours. Her temperature shot right past 102 and kept going, and she was unable to keep down anything – not even sips of water. We were encouraged to grab a bowl and hit the road, which we did almost immediately.

How could this have happened? None of her friends at school had been sick, and her little brother seemed fine…at first. Then on the drive back to Maryland he became quiet and his face turned bright red. His temperature? 103.5. But he never vomited. What could this be?
It would be two more days before my daughter would eat. She finally accepted a few bites of applesauce after I promised to buy her a new Calico Critters set if she would try. In the meantime, we learned what culprit had wreaked such havoc on our little girl. It turns out that the Monday after the party, the Norwalk virus ripped through Charlottesville, Virginia with such fury that one elementary school closed down and children had to be hospitalized. I pictured all of those birthday party kids, their hands on the same museum toys as my daughter’s. But how had it happened so quickly and why hadn’t my son thrown up? And didn’t we use the antibacterial gel in the museum…..frequently?

1. Not all “soap free” cleaning gels kill viruses: While anti-bacterial gels are generally good at killing illness causing bacteria on your children’s hands, they most often do not kill viruses, especially the powerful virus that causes Norwalk and other similar sicknesses.

2. Not all viruses are created equal: While a common cold virus was able to take my year and a half old to his knees, the Noro-virus that causes Norwalk – common on cruise ships and in nursing homes – works on a part of the body that is not fully developed until after the age of two. That is why my son spiked a horrible fever, but the illness was not able to develop fully. Also, some viruses develop much more quickly than others. Noro-virus, for example, has been known to develop in as little as 12 hours….or the time it takes to return from a museum, enjoy pizza and birthday cake, and head up to bed.

3. Disinfecting soap and warm water kill most viruses: Although there will be times this winter that you are out and about with your children and unable to get them to a sink, it is always best to try. That morning at the museum, my husband did not allow our daughter to wash her hands because he thought the bathroom seemed dirty. He instead brought her out to the anti-bacterial gel dispenser on the museum wall. We’ll be heading back to a Hands On museum for my nephew’s birthday again later this month. I am certain that we will all be singing happy birthday not only at the table this year, but twice through with our hands under nice, warm water.

These tips have been cross-posted at http://www.familyeden.net/.