Warning: I’m going to use the F word in this post. No, not that F word.  The word “fat.”  We don’t use it in my home to describe anything other than what we trim off of our meat.  It is certainly never used to describe a person, especially a child.  However, for some reason this little girl used it to describe herself.  I was probably in sixth grade here and was sure that I was huge, especially in that stiff, wool sweater.

By the time I was in 10th grade I had discovered loose, hippy dresses.  They hid what I was sure was an unattractive body (by the way, was totally crushing on the boy in the plaid shorts next to me here…)

Senior year of high school I grabbed this poor boy to hide behind. I was okay being seen in the brown cords and baby tee if I was standing up, but sitting down! Oh hell no!

Senior year of college? Bought this dress a size too big so that it would hang like a shiny red sack on me.

The jeans that I had on to kiss the Blarney Stone were rolled at the top so that they didn’t fall down while I traipsed around Ireland. It never dawned on me to buy a size smaller. I was too fat for that size.  I mean, look at me. I was HUGE (God, what I wouldn’t give for that flat stomach now…). 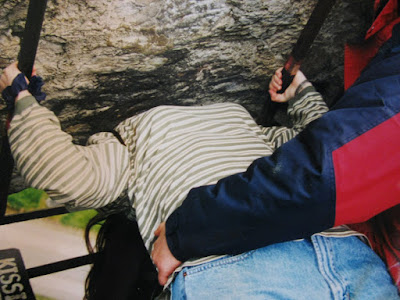 So here I am after the Summer of Mamavation and I’m only a few pounds away from what I weighed in these last three pictures. I look at these images now and I think I look thin.  Yet I look at pictures of me from the last month and the word that still pops into my head…fat. At what point do those of us who have struggled with body image see what’s really there and not what is in our heads? I can see the numbers on the scale every morning. I can see the number on the tag inside my new jeans. No, not the new jeans from June, the new jeans from August. The ones that I hope to replace in another few weeks.  I’m shrinking. I know that I am.  But I still feel the way that little girl in the scratchy sweater felt. In fact, at an event last month I wore a dress that I never would have had the nerve to wear before, not in high school, not in college, not traveling around Europe where people wear nearly nothing on the beaches and in the clubs.  Stepping off the elevator to walk into the event, I was shaking like a leaf, terrified.  I felt naked. I felt huge.  Does that ever go away?