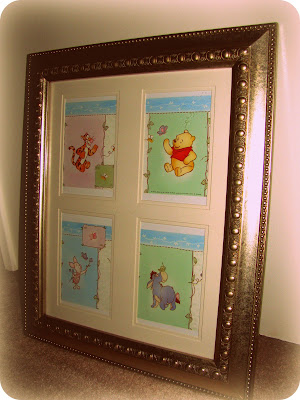 One of the first changes we made to our home when we moved here in the last days of 2003 was preparing the nursery. I was a few months pregnant and had suffered through a miserable start to pregnancy. Seeing the room take shape and knowing that there was a light at the end of the tunnel got me through the remaining sickness.

I had no idea that my daughter would arrive two months early and spend the first month of her life, not in the cozy Winnie-the-Pooh nursery, but in the hospital surrounded by monitors and nurses. The nursery became a refuge, a place for me to relax and pray when I was not sitting by my child’s isolette at the hospital.

Thankfully, the once empty nursery became the home of millions of happy memories from time spent with my infant daughter to hours nursing my son to days of watching my kids get to know each other and eventually become close friends.

When I realized that it was time for my son to have a bedroom that reflected the kind of boy he was becoming and not my ideas of the perfect nursery, I threw myself into making bedding and pillows, finding just the right big boy room accessories. But there was that looming issue…how could I let go of my babies’ nursery? I decided that I didn’t have to let go entirely.

I saved four squares from the bedroom’s border: a Winnie-the-Pooh, an Eeyore, a Tigger, and a Piglet. I purchased a frame from my local discount home store for $11.99 and placed one picture in each opening. Eventually I plan on breaking the squares into two smaller frames for my children to put in their own children’s nurseries, but for now, I have a small piece of that nursery that meant so much to me. It is an easy way for me to let go…while still holding on.