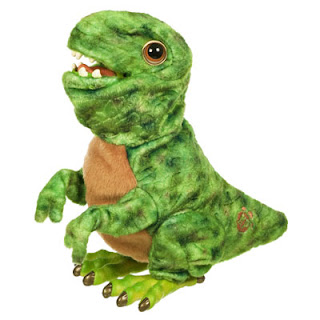 It’s Dinosaur Month, and as the parent of a three and a half year old, that is something worth celebrating!

Last spring two little Kota and Pals Hatchlings came into our lives. My son named his T-Rex and his Triceratops babies Nick, Jr. and Playhouse Disney, and they have been favorite toys ever since. He loves to hear them coo and watch them move, and he really cares for them the way my daughter parents her dolls. The little guy to the left is the T-Rex baby….or Nick, Jr. as he is called in our home.

Now there’s a bigger dino in town…Meet the Dinoroars Stompers!

Playskool’s Dinoroars Stompers has a big bark, but no bite. He is soft and silky with almost velvety “skin” and unlike his smaller buddies, he not only moves, but he actually walks. He is one of my top picks for this holiday season, along with his much larger big brother, Monty Rex. I had the opportunity to first see Monty Rex while attending the BlogHer Conference in Chicago last summer. He 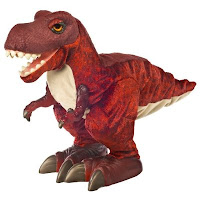 Monty Rex is the big daddy of the Dinoroars Stompers collection. This huge guy takes the same cooing fun on the Hatchlings, combines it with the stomping walk of the Stompers, and throws in even more animatronics and sounds. Plus, at nearly a foot and a half tall, he’s the perfect size for little dinosaur fans like mine.