Disney’s Earth: Give Your Child a Gift this Earth Day 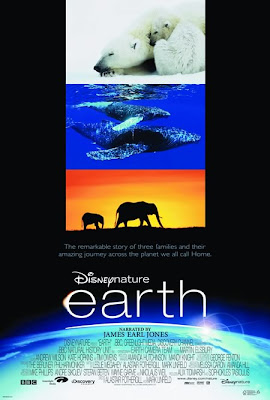 A couple of weeks ago I took my five year old daughter to see a movie in a theater for the first time. I was invited to see a sneak preview of Disneynature’s new movie, earth, and was granted permission to bring my daughter along. So there we stood on a weekday night, in line for Sno-caps and bottled water in a movie theater in downtown DC, just steps away from the National Portrait Gallery and Fords Theater.

My hopes for the movie were this: That my daughter would not have to hide her eyes too often, that I would not have too much trouble keeping my eyes open after a long day, and that the movie would have even a fraction of the magic that I’ve come to expect from Disney.

This movie could not have exceeded my expectations more!

From start to finish I was riveted. The audience was filled with members of the National Press Club in their business suits, sipping their beer and eating fancy filled pretzels. Yet the room frequently filled with oohs and awws, and I saw more than one woman…and some men…wiping tears from their eyes at times.

My daughter felt the same way. She stood for part of the movie, unable to sit as she watched the beauty of this world unfold before her on the big screen. The earth rolled by, transitioning from the icy white of winter to the greens and pinks and purples of spring. Even those moments in nature – the moments when only the strong survive – are portrayed so beautifully that only briefly did she have to look away, and not once was she scared or upset.

The message of this film is clear. The world is a beautiful place, but it will take work to keep it that way. But this message is not driven home through anger and guilt. Instead the directors chose inspiration. By inspiring a love for the beauty of this earth and its inhabitants, they have placed a new generation on their own journey to care for this earth.

My daughter has not stopped talking about this film. She has the poster in her room, and she occasionally mentions a particular scene, a moment that moved her. Give your child the gift of inspiration this Earth Day. Take them to see this film, and prepare to find your own inspiration as you see the earth through the eyes of your children.