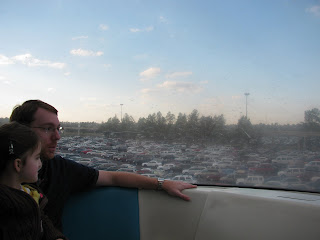 My children’s first trip to Walt Disney World last December was magical for so many reasons. The “snow” on Main Street following the Mickey’s Very Merry Christmas Party fireworks, the conversation my daughter had with Crush in Turtle Talk, the look on my son’s face the first time we rode It’s a Small World…

But one of my favorite Disney memories was the day we rode in the front of the monorail with the driver.
Many people are not aware that just a simple request and good timing will earn you the chance to ride in the front car of the monorail with the driver. And many who are aware of this Disney perk are either too shy to ask or never hit the lines at the right time. It is well worth the effort to ask because it is a once in a lifetime experience.
At the end of our first day of touring Epcot, we chose to return to our hotel a bit early and in doing so entered a nearly empty monorail station and watched as the doors opened on an empty train. We asked the cast member if we could ride with the driver, and he kindly showed us to the front where we took our seats just to the left and right in front of the driver, a quiet young lady who stoically took her post and remained hidden behind her mirrored sunglasses. 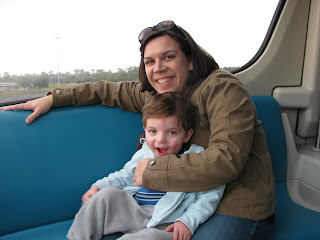 We had barely pulled out of the station when my then two year old son waved his arm around, high-fiving the air as if pressing the horn of a car and making beeping noises. When he raised his arm and pressed for the third time something magical happened….the monorail honked. Again, Noah pumped his little hand into the air and again the monorail honked. My husband and I erupted into fits of laughter along with our four year old daughter as the driver kept pace with my son who now believed he could move mountains with a motion of his chubby little hand. The whole time, the driver kept a poker straight face, her eyes no doubt glimmering with joy behind those sunglasses.

Disney does not hire staff. They choose cast members – men and women who not only take seriously the safety of those in their charge, but also fully appreciate the weighty responsibility of holding little imaginations in the palms of their hands.
I was heartbroken this morning to learn of the monorail accident at Walt Disney World and the loss of cast member Austin Wuennenberg. In the 38 years that the monorail system has transported families around the World, this is the first time that a fatal accident occurred. Austin Wuennenberg has been described by friends as a responsible, safe young man who loved his job at Disney and took the safety of the guests very seriously.
My hope is that Disney will continue to offer families the magical experience of riding in the front of the monorail despite this tragedy. It is difficult for any of us to imagine that such a terrible accident could occur in the Happiest Place on Earth. Tonight, my thoughts and prayers are with Austin’s family and the Disney community. Thank you for all you do for our children, and may your hearts heal quickly.