Bloggers – Stop Worrying About The Spiders We Can’t See 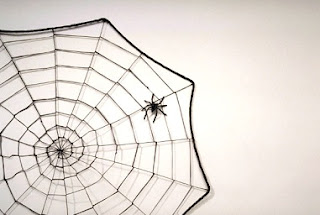 This morning as I was driving my son to soccer, I noticed a spider scurry across the inside of my windshield and hide in the interior of the windshield frame. Realizing that the spider might decide to lower himself on to me at any point on the rest of the drive, I panicked. What would happen? Would I drive off of the road? Would I scream and crash the car?

You see, I’m terrified of spiders. Perhaps it is a direct result of growing up in an eighty year old house where my bedroom was located in the dusty, old attic along with my eight-legged friends. I’m not a scared person in general. In fact, I once decapitated a snake with a shovel when it tried to get into my house. See…I am resourceful. But spiders? Forget it.
Thankfully the spider re-emerged and sat peacefully in the middle of the windshield while I was driving on an empty back street. I slowed down, pulled over, put on my four way flashers, then smushed the ugly little guy with a tissue. I felt triumphant! I felt heroic! I felt at peace!
Until a new thought crossed my mind…what if this guy was so little because he was a baby born in the dark recesses of my car and all of his baby brothers and sisters were waiting to run across my windshield? I’ve read Charlotte’s Web. I know how this stuff works. Spiders don’t have singletons. They have hundreds of baby spiders.
This is the kind of thinking that as bloggers can drive us insane. Had I allowed myself to give in to this line of thought, I would have spent the remaining fifteen minutes of my drive with this on my mind rather than paying attention to the safety of my three year old son. Instead of worrying about the car in front of me, the sharp turn on a tree-lined road, or the flag man waving for me to stop for construction, my mind would have been pre-occupied with the one hundred fictitious baby spiders waiting to do what…tickle my arm slightly?
While it’s wonderful to connect with other bloggers and even catch up on the good, the bad, and the ugly on sites like She Posts, we cannot let ourselves get caught up worrying about the spiders we can’t see. It’s more important to keep our eyes on the road ahead and where it’s leading us.