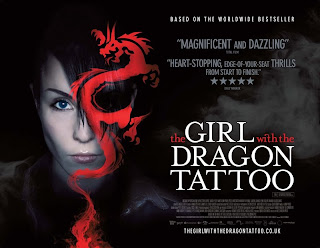 As part of my bloggy spring cleaning and move to WordPress, I will be blogging more about local events, specifically those geared to women and parents. This Thursday afternoon Music Box Films and RAINN are holding an event at the E Street Landmark Theater in DC. If you are interested in attending, please find the details below:

You are invited to a FREE screening of The Girl With the Dragon Tattoo! Music Box Films and RAINN would like to Thank You for all you’ve contributed to the fight against sexual assault.

WHERE: The E Street Landmark Theater in Washington, D.C.

WHY: This intelligent and suspenseful film illustrates some of the real life effects of rape, sexual abuse, and incest on victims and survivors and helps to underscore the importance of getting help. In fact, sexual violence is an extremely prevalent pattern throughout the film – and that’s why RAINN is getting involved.

Following the screening, RAINN volunteers will host a discussion of the film and its thought-provoking topics. Our hope is that this screening will serve as a template for other cities/venues to promote and lead discussions about this very important film and eventually offer a DVD & Discussion Guide package to volunteers and discussion leaders all over the nation.

THE BASICS: In this film adaptation of Stieg Larsson’s bestselling novel, we will follow the story of Mikael Blomkvist, hired by Henrik Vanger to solve the murder of his niece Harriet, and Lisbeth Salander, a punk-rock computer hacker. Together the two men link Harriet’s disappearance to several grotesque murders and uncover a Vanger family history that is both dark and horrific, all while discovering just how many secrets the Vangers are trying to hide.
*The Girl With the Dragon Tattoo is still in theaters! Please find more information about the film at http://dragontattoofilm.com/

TO ATTEND: Please RSVP to [email protected] and we’ll add you to the guest list. The more supporters we welcome, the better!

Thank you to my brilliant friend Julie at Writing Roads for letting me know about this event.