The Myth of the All-or-Nothing Mom 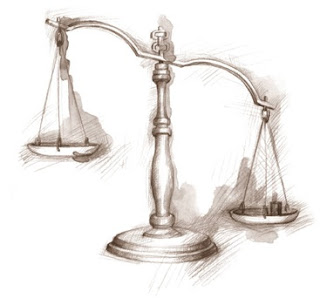 “…I try to draw the line but it ends up running down the middle of me most of the time.”

I grew up in a family that gave very little thought to how other people lived. Certainly we sat around summer picnics and shared all the “Did you know that…” gossip, but judgment was generally not a part of that conversation and keeping up with the Joneses didn’t exist. We lived our lives free of comparison to those around us.

In hindsight, my family might have appeared to be revolutionary. My father stayed home with my brother and I in our big, old house on Main Street in rural Pennsylvania. With the world watching – all one thousand neighbors with their curious stares – my big brother and I built big wheels ramps in the driveway with scrap wood while my dad mowed the lawn in his cut-offs and boat shoes, my mom off at work as a doctor, providing for her unorthodox family.

No one bothered to tell my mom she was changing the world, and she was too busy to notice, woken up in the night equally as often to go on house calls or change diapers, called in mid-day to medicate a hysterical mother whose son was just lost in a mine accident and asked to soothe a sad little girl whose big brother had just punched her. And like her mother before her who woke pre-dawn each morning to drive to the garment factory, she didn’t wallow in concern over right and wrong. She just lived.

“Just living” no longer exists. Even those restricted by economics face more choices than the wealthy women of generations passed, but with the luxury of choice comes the burden of criticism.

Mommy Wars are nothing new to my generation. In fact, they’ve been written about so frequently that even moms on opposite sides of issues as divisive as breastfeeding can come together in their dismissal of this type of media coverage. But while moms roll their eyes at another she said/she said story complete with all the drama of a high school turf war, they’re still taking sides and claiming their territory.

Who are these women? The ones who believe it is all or nothing?
The truth is that in most communities across the country, these all-or-nothing women don’t exist. They are a mythical creature created by publishing houses to sell books, by bloggers to get page views, and by the angry looking for a new battlefield on which to fight with all the self-righteous judgment of a modern day Crusades.
The reality is that most of us are struggling to find answers and quietly choosing positions on issues ranging from child care to co-sleeping, media exposure to gum chewing, positions that are fluid as we learn and grow, cave in moments of weakness…survive.
Want to know where I fall on these issues? Look to the middle and that’s where you’ll find me along with my affluent neighbors, the women at church, my local mom’s group, my best friends still making a life in rural Pennsylvania where the luxury of choice is still arriving for many women… 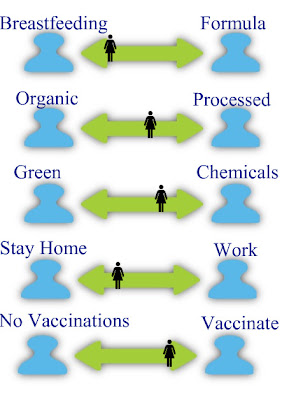 I stay home, but you better believe I work and often for a paycheck. A good one. Our children are up to date on their vaccinations, but they were administered on our schedule, not always the recommended one. I pumped breast milk for eight months for my premature daughter, mixed it with formula, and fed it to her in a bottle. My son? He nursed for seventeen months and still crawls into bed in the middle of the night because there’s no better pillow in the world than mom. While I clean my floors with steam and my sink with vinegar, I wipe my counters with chemicals unapologetically. My children eat and drink organic, fresh food – a virtual rainbow of health – while I spew do-as-I-say-not-as-I-do rhetoric from behind my soda can, my hand twitching in anticipation of the caffeine and chemicals.

Give me every choice in the world. It will never be all-or-nothing for this mom.