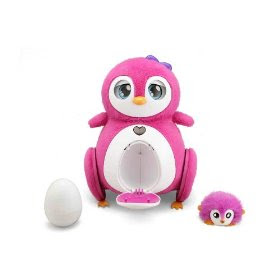 I have blogged more than once about my love for catalogs around the holidays, but I’d be remiss if I didn’t mention it again during this review. Apparently this love of looking at all items available to purchase is genetic, because my children will sit and look at mailers for hours, returning again and again to see which toys are recommended for kids in each age group, what the prices are, and their favorite thing to point out: “That’s for kids 8 and up! Wow!”

Looking at a holiday catalog is how my children first met Penbo the penguin. While we saw just a photograph of Penbo and her baby, you can see Penbo in action on YouTube.
While most of the items my children see remain on their minds for only moments after the catalog disappears, Penbo kept coming up in conversation. One day I noticed she had been circled in her catalog…in permanent marker. That’s when I decided I need to check Penbo out myself. Penbo is not cheap – $79.99 – and while Santa brings each child one large and a few small items each Christmas, we do not take that large purchase lightly. I wanted to see Penbo before I allowed her to waddle onto my daughter’s wish list.
I reached out to a PR friend who agreed to send us a Penbo to try and send back. The day that Penbo arrived was incredibly exciting! Every few minutes I reminded my kids that Penbo was only visiting, not moving in, but they didn’t seem to care. Both my five and three year old loved playing with Penbo, but this is clearly a toy for kids older than my son. Once Penbo had been here awhile and Noah calmed down, he played much more gently, but Penbo takes patience.
It was not, however, Noah who wanted Penbo. It was Emma, and she was even happier with Penbo than she anticipated. Suddenly we found ourselves in a predicament. I thought the idea of Penbo sounded cool, but wasn’t sure that I was willing to invest the money in purchasing her. I secretly hoped that Emma would tire of playing with her quickly, I could write a review, and we’d move on. But that hasn’t happened. On many occasions we’d hear Emma quietly playing with Penbo on her own in quiet moments: during Noah’s naps, while I was working, while Noah was working on a project with his dad. And we realized that not only did Emma want Penbo, but we wanted her to have her.
So what is this pink robotic penguin that has stolen our hearts?
Penbo is a an interactive penguin that responds to both the touch and sound of your child. She has an egg inside her tummy that contains her Bebe, and she also responds and interacts with Bebe when her wings are pressed. Not only does Penbo play fives games, but she also reacts to the way your child interacts with her. If she is ignored, she makes sad noises. When she is happy, she purrs. By her very nature she draws children back to her time and time again, which is why we decided that Santa will be bringing Penbo to our home on Christmas morning.
For more information visit Penbo online at http://www.penbo.com/.
Product was provided for the purpose of this review, but was returned to the manufacturer at the conclusion of the review period.